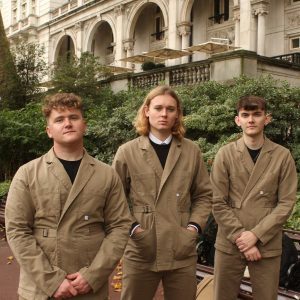 In an ever evolving age of online interactions dictating day to day life. From social media to zoom calls and live streamed gigs. The Rills are adopting and carving a niche path to indie fame. With over 100k followers and 2.5 million likes on TikTok the band have forged a fanbase by merging their humorous take on indie culture with a catalogue of exceptional singles.

The result is their latest release ‘Stardog’ (released on the 25th of November.) Which sees The Rills solidify themselves as a no frills indie rock trio. The track narrates the lives of small time drug dealer in villages. Combining bold and raucous vocals with gritty guitar and repetitive drums to make a crowd pleasing indie tune.

This band will no doubt tear up venues when they’re next allowed to play live, but for now grab a dark fruits and check out their TikTok, trust us it’s hilarious.

We have updated our Nice Swan Picks playlist over on Spotify featuring tracks from Mandrake Handshake, Malady, Sprints, Courting, PVA, Yard Act, The Rills, Julia Bardo and many more!

Mandrake Handshake’s have caused quite a stir on arrival this summer, the indie-stonery outfit have already drawn a slew of acclaim from key indie press champions in their short time together. Including NME, DIY, Clash, So Young Loud & Quiet. Incorporating influences of krautrock, funk, Japanese animation and Latin pastoral poetry to create a unique brand of ‘Flowerkraut’. Amidst a sprawling barrage of psychedelia. Produced by Stereolab’s Andy Ramsay, Mandrake Handshake’s ‘Gonkulator’ is available on all digital platforms.

Malady was birthed as a result of Percy Junior Cobbinah (vocals/guitar) and Charlie Clark (guitar/synth) getting to know one another from turning up at the same gigs. Cobbinah and Ertan Cimen (drums) frequented all the same uni house parties. While Clark met bassist Khaleem Mitchell-Patterson at college. Fusing musical elements from dub, post-rave, early dubstep and IDM with formative indie guitar music. The band draws inspiration from day-to-day living, focussing on conversations and social observations.

Dublin-based four piece, Sprints are the latest new act to emerge from the city fast becoming one of the most prolific places for hot new bands. Similarly with the recent success of other locals Fontaines DC, Girl Band & Silverbacks – Sprints are set to be the latest in line ready to burst out of the city.

Their creative process is very much rooted to the everyday goings on around them. And just like a true garage band, write and rehearse in their village home’s back garden shed. Taking things to the next level, they were quick to team up with Girl Band’s Daniel Fox who has been producing them in his studio. Drawing influence from the likes of Sonic Youth, Iggy Pop, Patti Smith, The Strokes and LCD Soundsystem. There is a fun, energetic and retro feel to what they do. But very much sounding as fresh and exciting as their local peers.

Liverpool-based four piece, Courting are the latest new act to emerge from the city steeped in such fantastic and diverse musical heritage. The band, who write and rehearse in the basement of a city restaurant. Find inspiration from the creative melting pot of Merseyside. And with fellow locals The Mysterines making waves. This could be the dawn for another exciting wave of scouse bands.