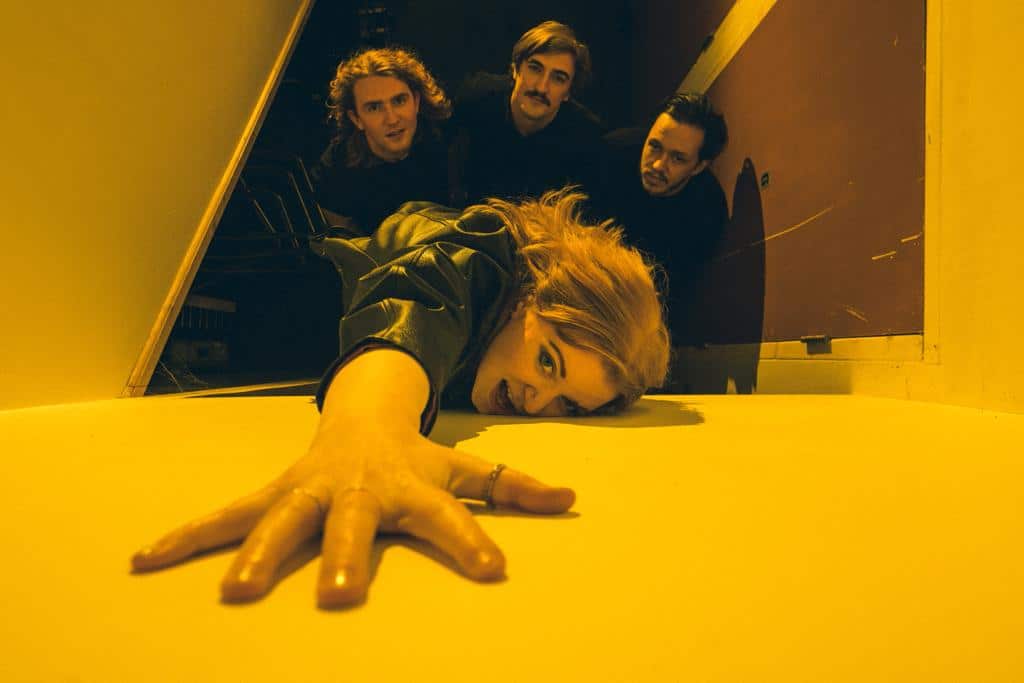 “Sprints may be the latest to emerge from Dublin’s fertile stable of guitar-wielding new heroes, but their two-fingers-up, no-nonsense rattle and roll arrives as the natural heir to Amyl and the Sniffers’ grot punk – DIY

Sprints today share new single Little Fix taken from their upcoming EP A Modern Job, which is out 11th March 2022 on Nice Swan Records. The band will also tour the U.K. through Feb/March – full dates below. Little Fix is an instant and glorified banger. Direct and arresting, and, as with their previous singles, the Dublin based outfit once again hit the sweet-spot between fragility and no-nonsense punk attitude. On the new single, singer Karla Chubb says: “Plagued by insecurities, imposter syndrome and gender stereotypes, Little Fix is the culmination of all my fears – the, sometimes, self applied pressure that as a woman in music I can’t just be good, I have to be great. I feel like I am in a constant state of proving myself.

That no matter what I achieve, learn, write, play or sing, there will always be a critic, a voice in the crowd or in my head telling me that it’s still not good enough, that there’s a million men out there who are better and I’ll always just be “good for a girl”. Little Fix is a song that instead of running away from that fear, shit talk and criticism, it runs head first at 100 miles an hour into it. Pulling influence from Thee Oh Sees and Courtney Barnett, it’s lyrically the song I am most proud of and one that on tour proved a serious fan favourite” Sprints combine guitar-driven hooks, motoric rhythm and emotive lyricism to create a unique sound that pulls from garage, grunge, punk and beyond. Like the Irish guitar acts who have paved the way for them: Fontaines D.C., Silverbacks and Girl Band, the sound of Sprints is urgent and vital at every turn. Often labelled a political band (Debut EP Manifesto’s title track, for example, was written in response to the Repeal the 8th referendum), even the way Sprints inhabit that idea feels refreshing. “I don’t have to know everything to be able to tell you that something’s shit.

I understand that women should have access to abortion, and I understand that mental health services are not adequate to stop people from committing suicide, so yeah, I don’t know exactly how much money is being spent on it but I don’t need to in order to tell you that it’s not enough,” Karla stresses. “It’s just a class barrier to make people feel like, if they’re not educated enough, then they can’t be involved in the conversation. But you don’t have to be Usain Bolt to run a race, and you don’t have to understand the theory of everything to understand that, morally, someone’s an asshole.”

More confident in their opinions and identities than ever, forthcoming EP ‘Modern Job’ (produced once again by Gilla Band’s Daniel Fox) is set to take these ideas – that the personal is innately political, and that expression and using your voice is fundamentally crucial – and solidify them even further. Sprints have received a wealth of press support as well as love at Radio 1 and Radio 6Music. Recent single Modern Job was premiered by Steve Lamacq and covered by The Guardian, Dork, NME, Loud & Quiet, Gigwise and others. Sprints embark on a full U.K. tour though Feb/March – see dates below. EP pre-order: https://sprintsmusic.bandcamp.com/album/a-modern-job