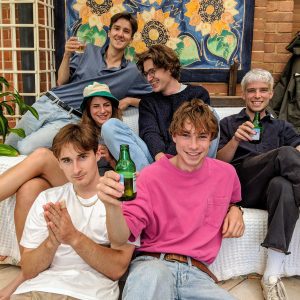 Chromatica by Lady Gaga holds on to Number 1 for a second week in a photo-finish Official Albums Chart race.The UK’s fastest-selling album of 2020 so far retains the albums top spot finishing ahead of its closest competitor by less than 600 chart sales.

It means midweek leaders, indie band Sports Team score this week’s highest new entry at Number 2 with their debut album Deep Down Happy. The six-piece do however seize the title of the biggest seller of the week, leading on physical sales as well as having the edge on digital downloads. Sports Team score the best seller of the week across UK independent record shops and Number 1 on the Official Vinyl Chart after shifting 4,300 copies on wax.

The six-piece, who formed at Cambridge University, took their loss in good spirits – comparing the week-long competition to 1995’s “battle of Britpop”, when Blur’s Country House beat Oasis’s Roll With It to number one.

“It was Blur vs Oasis, and we were Oasis,” they wrote on Twitter, next to a picture of them sharing a beer at a picnic table. Took it closer than we had any right to. Will be paying back the IOUs well into our forties but… what a ride. Love you all.”

Overall an absolutely fantastic achievement for a debut record! Everyone here at Nice Swan is extremely proud of all that you have achieved over the last few years.