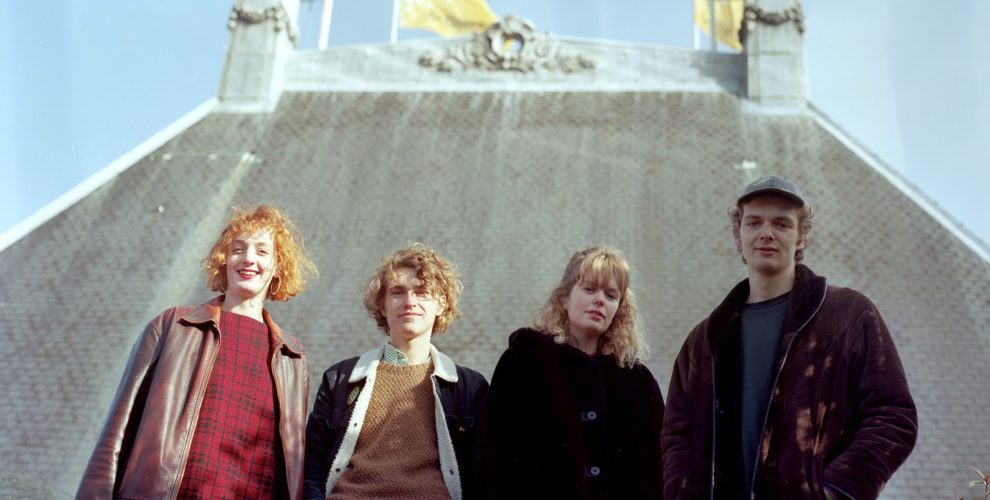 Introducing the Amsterdam artist who makes sweet, fuzzy music for you to get lost in.

British Music Press™ has recently been extremely on one about the ‘resurgence’ of a little thing called guitar music. Lots of publications seem to have pinned this phenomenon to the rise of the young south London band Shame and their contemporaries, though for my money, the scope is a bit wider.

Firstly, it’s important to dispel the myth that rock comes and goes like an unreliable weekend dad – the many people playing in thriving local scenes around the UK (and beyond, of course) are evidence enough of that. New guitar music falling out of the headlines doesn’t make it dead. It is always breathing, alive on the peripheries, there if you’re willing to look for it (the internet has made this even easier). However, if we are going to look to traditional coverage as an indicator of what’s popping, it’s interesting and heartening that a number of the bands catching attention right now include women. The typical picture of rock in the mainstream press has, historically, been depressingly male, though of late, you’ll have been browsing with your eyes shut to have missed acts like Sorry and Goat Girl in UK indie titles. And if these publications cast their nets slightly further out, I’d be surprised if the name of another artist – Pip Blom – doesn’t start cropping up on their pages sooner rather than later, too.

Pip’s sound resonates well with the slightly Britpop-reminiscent feel of the wave of ascendant guitar bands here in the UK, calling back to the rougher edges of Blur. Its lo-fi sensibility and understated vocal, though, add a new, unique twist that could take her anywhere. It’s a charming combination, and part of the reason we’re premiering her new single “I Think I’m in Love” right here. Chatting to Pip – who is sweet and modestly (though unduly) self-deprecating – the music’s winning quality makes a special kind of sense. This is heightened and filled out by the addition of a band. Though she started off making music alone – first releasing material in 2016 – Pip has now built an outfit around herself, comprised of her brother Tender, and friends Gini and Casper. “When I first released four songs, back in 2016, there was no band. I always wanted to start one and make music together with other people, but I wasn’t able to find anyone who wanted to join me. So I wrote songs and recorded them at home.”

All of a sudden people liked them, added them to their playlists and started writing about them,” she adds. “So then the panic started, as I wasn’t able to play the songs live because there was no band! That’s kind of how it all started. It’s two years later now and we have a new set-up. My brother Tender has stayed with me the entire time, but Casper and Gini weren’t there from the beginning.”

Now that her lineup is solidified, Pip’s style is already a distinctive one, and the video for “I Think I’m in Love” feels like an a remarkably good visual representation of the sound on display. Shot on Pip’s home turf of the Netherlands (specifically in the city of Groningen) by filmmaker Hache, the video is fuzzy, bright, and a little bit raucous, mirroring the music. She remembers the shoot, telling me, “Hache, who made the video, came up with the idea. He had spotted a few very cool locations in Groningen where he really wanted to film. We had a few hours to film it cause we were there for Eurosonic Festival, and we had to film in between shows. My favourite shots are the ones on the rooftop – I loved being there.”

It seems as though Pip will be getting used to large stages like Eurosonic’s, as she’s just been announced as the main European support act for The Breeders’ upcoming tour. I wonder how that feels, considering The Breeders’ status as standard-bearers for women in rock music. “The Breeders have been one of my favourite bands since I was a tiny human being,” Pip enthuses. “I used to have ‘Cannonball’ as my ringtone! When I started making songs there were a lot of singer-songwriters at that time, and of course there is nothing wrong with singer-songwriters, but I was so sick of girls with guitars singing cute songs. I wanted to do something cool, and The Breeders were such a good example of a band with girls that was very powerful.”

If Pip’s intention was “to do something cool,” she’s well on her way to achieving that with her catalogue so far. “I Think I’m in Love” is due for release on Nice Swan Records, also the label of Noisey faves Sports Team (with whom Pip will be touring the UK in March – she “can’t wait”). And though, she says, “Because we’re not from the UK it’s hard to feel part of the UK scene,” it seems that while her brand of straight-up but heady pop-rock is primed for global success, Pip Blom will be never be without a welcome on these shores.