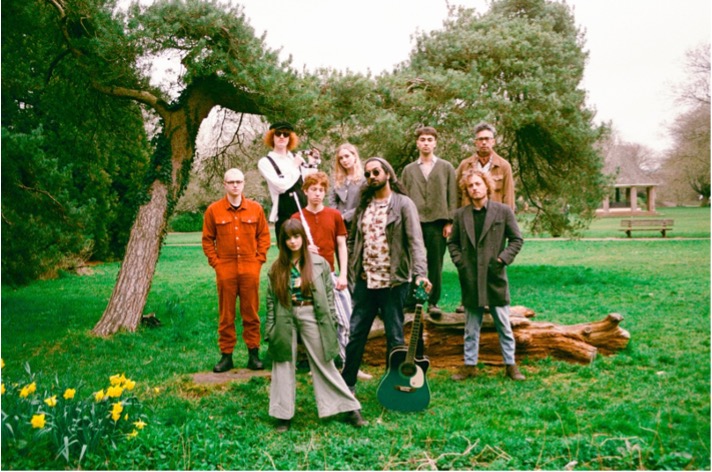 Formed in Oxford where they lived, hung out and rehearsed together on campus, the eclectic group were christened after a song by The Brian Jonestown Massacre, incorporating their influences of krautrock, funk, Japanese animation and Latin pastoral poetry to create a unique brand of ‘Flowerkraut’ that vividly defines their sound.

Having initially teamed up with the cult indie label for their ‘Nice Swan Introduces…’ series (in partnership with RIP Records) late last year, the creative outfit have since found label-mates in the likes of Courting, SPRINTS and Anorak Patch, and fast established themselves as one of the most enticing new acts in the UK psychedelic scene.

With widespread acclaim arriving via multiple key indie press titans (NME, NPR, DIY, The Line Of Best Fit, Dork, So Young, Clash, Loud & Quiet, Gigwise), the newcomers certainly seem to be attracting the right kind of attention following the release of mesmeric debut effort ‘Mandragora’ and exhilarating follow-up ‘Gonkulator’, with their first few plays on the BBC Radio 1 (Jack Saunders) airwaves already opening them up to a vast new audience.

Detailing their EP, the band explained: “‘Shake the Hand That Feeds You’ represents the culmination of many strands of thought over the process of several months. It is designed to announce the coming of the Mandrake in all her forms and the ascent into her realm; as it soundtracks the listener coming to know what will be expected of them for all future sonic explorations.

No expense has been spared to bring the listener to the zenith of psychedelic high-fidelity and have them fully understand what they otherwise might only hint at knowing. This is ‘Flowerkraut’. This is the beginning. This is the Mandrake”.

Recorded at Press Play Studios in Bermondsey with one of their heroes in Stereolab’s Andy Ramsay, Mandrake Handshake’s ‘Shake the Hand That Feeds You’ is released June 18th via Nice Swan Records.