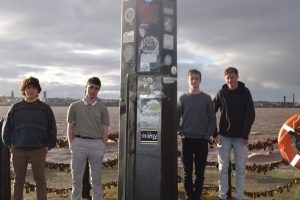 Liverpool-based four piece, Courting are the latest new act to emerge from the city steeped in such fantastic and diverse musical heritage. The band, who write and rehearse in the basement of a city restaurant, find much support and inspiration from the creative melting pot of Merseyside, and with fellow locals The Mysterines making waves, this could be the dawn for another exciting wave of scouse bands.

Courting draw influences from the likes of Parquet Courts, Pavement and LCD Soundsystem, yet maintain a very British identity. Alongside the likes of Sports Team, they’re fuelling the long-awaited Britpop revival we’re seeing, as evident in ‘David Byrnes Badside’ – showcasing all the characteristics of the genre, and announcing the emergence of Liverpool’s most exciting new band. Recorded live with Robert Whitley at Whitewood Studios in their hometown, the song is classic British storytelling at its best; cheeky, fun and witty lyrics laced with social commentary are complemented by the essence of the Britpop sound – energetic, catchy and raucous rock ‘n’ roll. Britpop is back and Courting are leading the charge.

Lead singer and guitarist Sean says on the single; “David Byrne’s Badside has nothing to do with the Talking Heads frontman. It’s about class tourism and the casual racism that exists in Britain today. It’s a portrait of the type of person who votes UKIP and wants to close our borders yet promises they’re not a racist. The type of person who says to buy British yet owns a Porsche. At the same time, we’re referencing and poking fun at more lighthearted aspects of British culture, like the collective rage when somebody takes the low of er on The Chase, and Twitter spats about Blur and Oasis. We also really just wanted an excuse to have a saxophone solo.”

Having supported the likes of Sports Team, FEET and Heavy Lungs, Courting have also started to build an army of local fans, with their last few shows around Liverpool selling out rapidly. Courting are now set to unleash their ferocious and witty take on britpop to be the latest in succession of this great city’s artists.