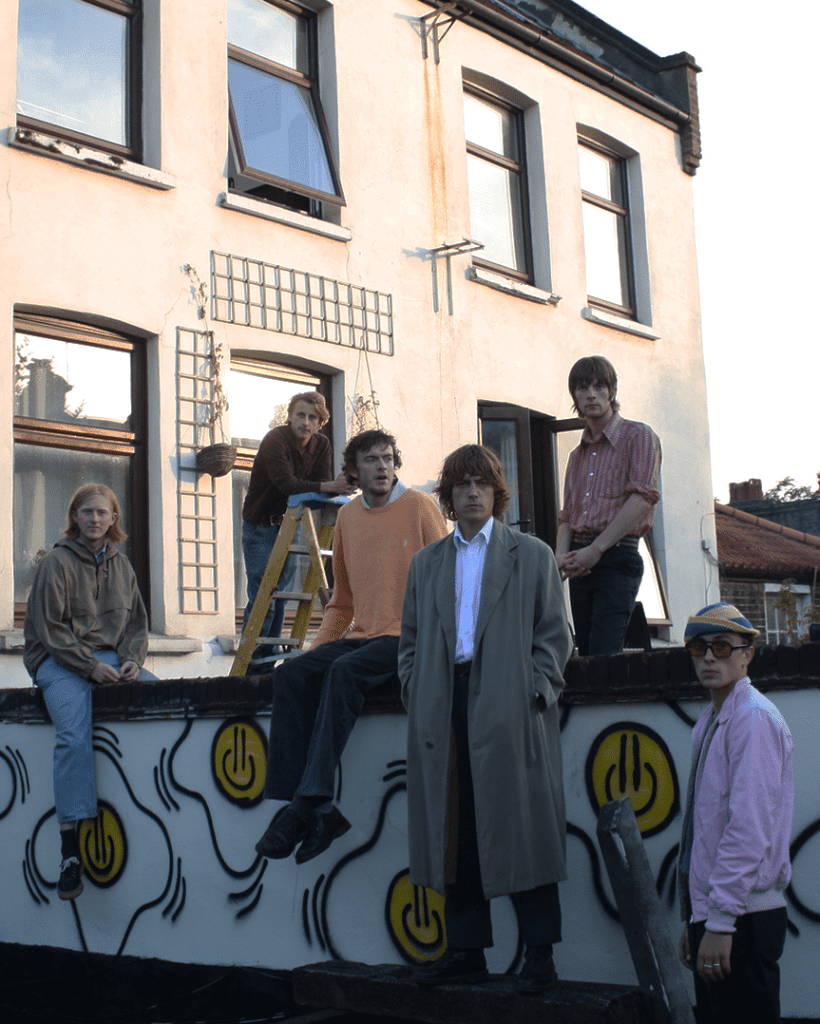 Last year, Nice Swan Records started the monthly ‘Nice Swan Introduces…’ series, shining a light on the most exciting emerging talent. Following releases with the likes of Sports Team, Pip Blom, FEET & FUR, the Series introduced a whole wave of new and exciting talent including Courting, Sprints, Malady, English Teacher & Mandrake Handshake, which cemented the label as one of the country’s most exciting independent record labels for discovering the hottest new talent. The series is now set to return for a second volume and is launched by dynamic new six piece DEADLETTER.

Today (03/11/2021) DEADLETTER release their new single “Pop Culture Connoisseur”. Hailing from Yorkshire, the now South London rooted band channel the droll fury of The Fall and the lopsided rhythms of Talking Heads into a strain of danceable post-punk, exploring the darker side of existence through a lens of narrative-driven levity.

Previously supporting the likes of Squid, Viagra Boys and Pip Blom, DEADLETTER have emerged as a genuinely thrilling live prospect. Experts in the field of intensity, the band seamlessly switch from conversational verses into a mix of unadulterated post-punk fury and irresistible rhythm, addressing themes such as bureaucracy, loss of personal identity, and modern-day consumerism.

New single “Pop Culture Connoisseur”, produced by Theo Verney (TRAAMS, Lazarus Kane, FEET), finds singer and frontman Zac Lawrence switching from the overt politicism of previous releases into a more tongue-in-cheek narrative centred around the case of PC Read, a police officer fired for stealing doughnuts through a self-service checkout. In addition to providing a case study into the fashion those in positions of authority often consider themselves above the law, the track also aims to comment at the manner modern morality so often relates to PR optics, as the cultural  trope of law enforcement eating doughnuts is played out in real time.

DEADLETTER’s 2020 debut single “Good Old Days” was a clear stylistic marker of the band’s vision and received both regional BBC and 6Music play, as well as being added to 6Music’s ‘Introducing’ playlist alongside the normal A, B and C list.  Follow-up single ‘Fit For Work’ received both regional BBC and 6Music play from Steve Lamacq and Tom Robinson. The track was also made Huw Stephens’ “Tip of the Week” on BBC Radio 1, and a live session of the track was also played on his Introducing show on Radio 1.

Third single “Fall of the Big Screen” received national airplay from Steve Lamacq (who chose the band as his ‘Spotlight Artist’) and Tom Robinson on BBC 6Music, and Gemma Bradley on Radio 1.

To date, DEADLETTER are widely praised at press by the likes of The Guardian, DIY Magazine, Loud And Quiet, So Young Magazine, Upset Magazine, Gigwise and more.