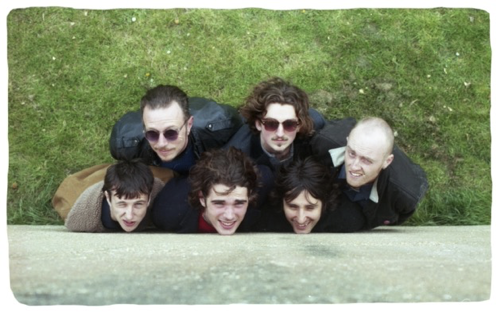 The latest act to emerge from Brighton’s thriving indie scene, Opus Kink certainly deliver on their early promise with eclectic new single ‘This Train’, fusing their ever-evolving and difficult to categorise style to perfection as they continue their experimental ascent amidst a flurry of acclaim.

With plenty of tastemaker (NME, So Young, Clash) and BBC 6 Music (Steve Lamacq) support accompanying spring release ‘Wild Bill’, the enigmatic collective once again team up with The Charlatans’ Tim Burgess on production duties for ‘This Train’, having ventured to the legendary Rockfield Studios in Wales to record their newest material late last year.

Marshalled by a pounding, chugging rhythm section and shrieking horns that help build the song to fever pitch, ‘This Train’ is primed for the band’s wild and unpredictable live shows, with dates lined up nationwide over the coming months, including two Nice Swan showcase gigs alongside label-mates Malady, Mandrake Handshake and Hallan later this summer.