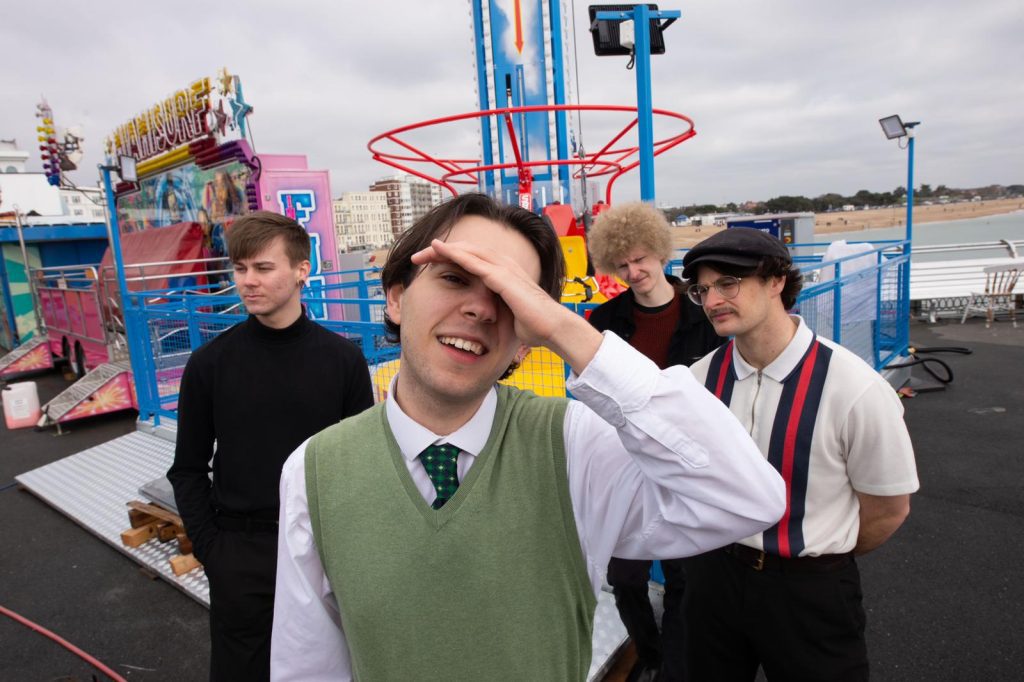 Picture Orwellian bleakness combined with Burroughs Beat pennings and add a sprinkling of post-punk. A concoction which we call Hallan. This Portsmouth quartet take the mundanity of everyday life and perfectly regurgitate it into a semi-abstract and distorted frenzy of punk musings, and here they are following up hard-hitting EP lead single ‘Hands Up’ with pulsating new effort ‘Orwell’s Idyllic Future’.

The band’s latest release is a full-frontal assault of pulverising sound, with grinding bass guitar and bombarding drums that refuse to stop driving from the very beginning. Partnered with crunching guitar and frontman Conor Clements’ commanding vocals, ‘Orwell’s Idyllic Future’ delivers a thought-provoking commentary on the current state of modern society and how it parallels George Orwell’s 1984.  Detailing the release, the group stated:

“With all sorts of wings be they left or right swinging for each other with mocking tweets or cancel culture as their weaponry, it’s easy to feel lost as an onlooking bystander in a world full of hostility. Relationships become strained and questioning your own mental stability becomes just another daily problem as you peruse through endless news articles, each one presenting you with a slice of self-loathing or existential dread. But nothing is to fear as the longer you stare upon the words you read in your sunday newspaper or mobile device the more you will feel the sweet embrace and comfort of Big Brother’s gentle arms. Orwell’s Idyllic future has come to be, and everything is going to be just okay.”

Within an 18th century fortification built into the side of a hill surrounded by a forest, Hallan constantly experiment with and morph their sound, with influences coming from classic post-punk giants Joy Division and The Fall.  The four-piece struck gold when they came across Rob Quickenden of Ford Lane Studios in their search for a recording studio for their earlier track ‘Modern England’.  Hallan have reunited with Quickenden once again for their upcoming ‘Reporting Live From The Living Room Floor’ EP, set for release July 16th.

Having managed to build an army of fans, alongside a roaringly positive reputation amongst local and national press, the band’s early supports alongside Sports Team and Porridge Radio have left them primed to carve their own path together in 2021. With backing from Nice Swan Records (Sports Team, Courting, SPRINTS) ‘Orwell’s Idyllic Future’ looks set to launch Hallan towards the forefront of the post-punk scene.

Hallan’s ‘Orwell’s Idyllic Future’ is released April 30th via Nice Swan Records and will be available on all digital platforms.