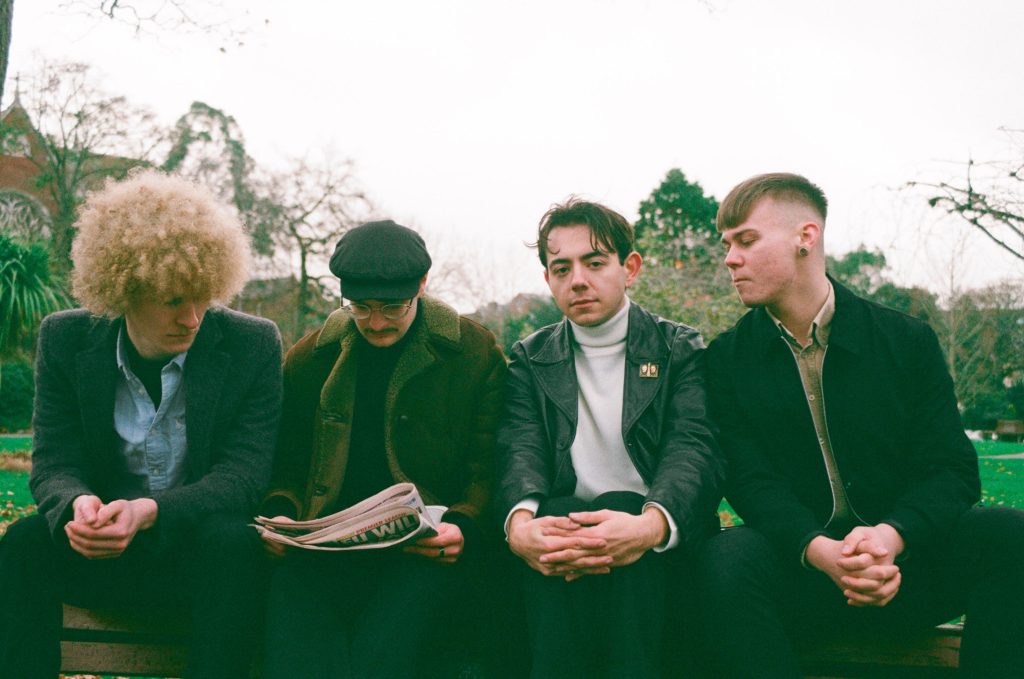 Hallan announce the release of their latest single ‘Hands Up’ and debut EP ‘Reporting Live From The Living Room Floor’. The former of which sees Hallan delve into the Burroughs-esq commentary on everyday people and everyday life but in a way you’ve never heard before.

Picture Orwellian bleakness combined with Burroughs Beat pennings and add a sprinkling of post-punk. A concoction which we call Hallan. This Portsmouth based four piece take the mundanity of everyday life and perfectly regurgitate it into a semi-abstract and distorted frenzy of punk musings, and they are hitting the ground running in 2021 with their single ‘Hands Up’.

‘Hands Up’ sees the band introduce their latest narrative of “Gumshoe Boy”, an undercover operative in a satirical, parallel world where alternative music is outlawed in The State and the only legal audio consists of power-pop indie music and advertisement jingles. This alternate reality is explored throughout their EP ‘Reporting Live From The Living Room Floor’ set to be released on the 16th of July 2021. The full track listing for the EP is as follows

The EP draws influence from everyday observation, mainstream pop culture and laughable tabloid fiction. ‘Reporting Live From The Living Room Floor’ paints an semi-abstract but tangible image of the new decade, holding a mirror up to not only modern society but individuals. The first taster of this narrative comes in the form of ‘Hands Up’ a cacophony of post-punk raucousness. Frontman Conor speaks on the track;

“Our sound changes depending on our agenda at any time, finding a different stride with every step. With ‘Hands Up’ we found ourselves dropped into a western rerun armed with a fiercely cowboyish twang on our six string shooter. We wanted to forth a thematic, semi abstract prose, attacking businessmen and penny pinchers in a  flurry of suitably delirious criticisms.”

While struggling to find a studio which didn’t just place Hallan in the cogs of a much larger machine, the band found Rob Quickenden of Ford Lane studios for their last single “Modern England”. Returning to the rural depths of Yapton, Hallan once again join forces with Quickenden on their debut EP. In a studio setting where no ideas were out of the question and experimentation and exploration were the words of the day, expect ‘Reporting Live From The Living Room Floor’ to be a no-holds-barred exploration into the minds of Hallan.

Back in the far forgotten world of live events, Hallan supported the likes of Sports Team and Porridge Radio. Yet 2021 sees the band carve their own path all together. Backed by Nice Swan Records (Sports Team, Courting, Sprints) Hallan are finally ready to release their latest imaginings to the world, beginning with ‘Hands Up’.