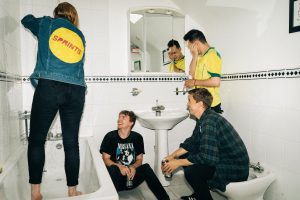 Dublin-based four piece, Sprints are the latest new act to emerge from the city fast becoming one of the most prolific places for hot new bands. With the recent success of other locals Fontaines DC, Girl Band & Silverbacks – Sprints are the latest in line ready to burst out of the city having just formed last year and are already creating a wave of excitement across Dublin with early single, ‘Kissing Practice’.

Their creative process is very much rooted to the everyday goings on around them and just like a true garage band, write and rehearse in their village home’s back garden shed. Taking things to the next level, they were quick to team up with Girl Band’s Daniel Fox who has been producing them in his studio. Drawing influence from the likes of Sonic Youth, Iggy Pop, Patti Smith, The Strokes and LCD Soundsystem – there is a fun, energetic and retro feel to what they do but very much sounding as fresh and exciting as their local peers. The Cheek is a raw, raucous and bass fuelled single with post-punk and alt-rock influences. Laced with sarcasm, the song tackles sexuality head on.

Lead singer and guitarist Karla says on the single; “The Cheek was inspired by conversations at bars and Karla’s experience with her sexuality. As a person who is bisexual, your experiences can be dif icult. You’re not gay enough, you’re not straight enough, you can be over-sexualised or demonised, I’m going to bed or I’m going to hell. People of any gender identity or sexuality will face criticism and pigeon holing based on their label. Whether it’s being told I wouldn’t have been kissed did they know I was bi, or being asked would I do a threesome, having your ass grabbed and your space invaded – this is my big fuck you to all those people.

Thematically it is all centres around my experience of sexual assault, unsolicited advances and sexuality as a whole. It’s raw, personal and high energy because it’s a song that is all about venting frustrations. “ Sprints have already started to build an army of local fans, with their last few shows around Dublin selling out rapidly. The band are now set to unleash their ferocious post-punk to the world.

London group, Malady have been gigging around the capital and teaming up with friends for shows over the last 18 months. The four piece have now released their second video offering following on from the live video for their track ‘Famous Last Words’. Next up is this awesome demo of ‘Wheel of Fortune’ something that is probably being span right now at Arsenal’s training ground.

It’s early days for Malady, a group who openly express that they’re still honing their craft as they go. With this in mind, the band have taken a step forwards with a relatively non committal release which serves a something for future fans to go back to when they return from a show.